In Harbin, China, schools, major roads and an airport were closed as dense toxic clouds of smog have enveloped the city. Last week a red alert for fog was issued because visibility in some cities was less than 20 meters.

Pollution levels were recorded at PM 2.5, which are thirty times the World Health Organisation’s (WHO) recommended standard. 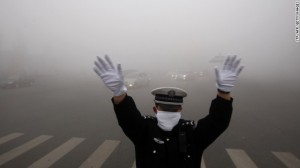 Annually at this time of year, residence heat their homes mainly with coal fires as this is the main fuel resource. The emission from the coal creates poor air quality.  An exponential increase in the number of cars on the roads and industrial pollution are seen as the main contributors. Low winds and high humidity has contributed to the problem.

Residence of Harbin are protecting themselves by wearing face masks outdoors but this year the smog has been so bad that it has been reported that all face masks in Harbin have sold out. The people of Harbin are angry because the government has not prepared for this event which happens annually.

China has stipulated that it will list the ten most air-polluted cities monthly in order to shame the nation into environmental action. At the 18th Air Pollution Control Conference in Beijing, China’s Vice Premier Zhang Gao Li stated “We must put air quality control as an ecological red line for economic management and social development,”.