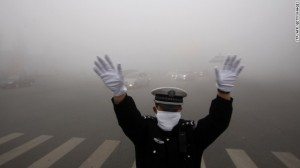 A policeman gestures as he works on a street in heavy smog in Harbin, northeast China’s Heilongjiang province, on October 21, 2013. Choking clouds of pollution blanketed Harbin, which is famed for its annual ice festival, reports said, cutting visibility to 10 metres (33 feet) and underscoring the nation’s environmental challenges. CHINA OUT AFP PHOTO (Photo credit should read STR/AFP/Getty Images)