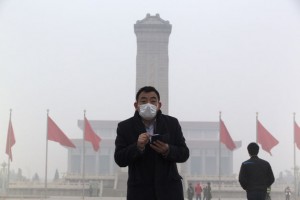 Air pollution in China, the world’s biggest carbon emitter, has reached intolerable levels and the country should aggressively cut its reliance on coal, according to the government’s climate-change adviser.

“China’s pollution is at an unbearable stage,” Li Junfeng, director general of the National Center for Climate Change Strategy and International Cooperation, said at a conference in Beijing yesterday. “It’s like a smoker who needs to quit smoking at once otherwise he will risk getting lung cancer.”

Chinese authorities have pledged to shut polluting factories and limit the number of cars in response to growing public concern that dirty air and water are damaging people’s health. China, which now uses coal for about 65 percent of its energy, should cut that ratio by two percentage points a year, according to Li.

The comments came as the concentration of PM2.5, fine particulates that pose the greatest risk to human health, rose to at least nine times higher in Beijing than levels recommended by the World Health Organization. PM2.5 levels near Tiananmen Square today were 239 micrograms per cubic meter at 11 a.m. and had averaged 228 in the past 24 hours, the Beijing Municipal Environmental Monitoring Center said on its website. The WHO recommends 24-hour exposure of no higher than 25.

In response, China’s environmental protection regulator said yesterday it had sent inspection teams to determine if local authorities in Beijing and surrounding areas had taken adequate measures to against air pollution.

The air quality index reading near Tiananmen Square was 278 as of 11 a.m. today, a level the city defines as “heavy” pollution. That prompts a warning for children, the elderly and those with illnesses to avoid outdoor activities.

Higher levels of pollution were reported in other parts of northern and central China. The air quality indexes in the cities of Shijiazhuang and Xingtai in Hebei province and Yangquan of Shanxi province were at levels defined as severe pollution, according to data from the China National Environment Monitoring Center. As of 10 a.m., PM2.5 levels were as high as 309 in Shijiazhuang, 431 in Xingtai and 356 in Yangquan.

Shijiazhuang took emergency steps yesterday that cut the number of private vehicles on its roads by 20 percent, the official Xinhua News Agency reported, citing people it didn’t identify. In Beijing, thirty-six companies have halted production and another 75 have cut their output since Feb. 21, Xinhua said, citing the Beijing Municipal Commission of Economy and Information Technology.

The world’s second-biggest economy needs to reduce its reliance on heavy industries and cut coal’s share in its energy mix, Ma Jun, chief economist for greater China at Deutsche Bank AG, said at the same conference.

“China should cut heavy industries’ share in gross domestic output by 9 percentage points between 2013 and 2030 to meet its pollution-cut target,” Ma said.

Heavy industries including construction and manufacturing made up about 46 percent of the economy in 2012, according to Ma. He proposed reducing coal’s share in energy consumption to 46 percent by 2030, and increasing the use of clean energy to the same rate by that year.