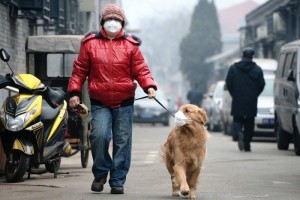 China’s biggest online face-mask sellers are running out of stock as consumers rush to protect themselves from smog that has shrouded large swathes of northern China for a week.

Beijing’s official reading for PM 2.5 – small airborne particles which easily penetrate the lungs and have been linked to hundreds of thousands of premature deaths – stood at 501 micrograms per cubic metre on Wednesday afternoon. The World Health Organisation’s recommended safe limit is 25.

The situation was improving, however, with the reading for a location in the centre of the capital recorded at 100 by Wednesday evening. An alternative measure by the United States embassy in Beijing said levels were at 542 in the city in the afternoon but had fallen to 180 in the evening.

The capital was on its sixth day of an “orange” smog alert – the second highest on the scale – with the air tasting gritty and visibility down to a few hundred metres. The choking smog has seen sales of anti-pollution products boom and online face-mask stores were struggling to meet demand.

Concerns at the impact on children’s health were particularly high, with most schools in Beijing keeping students indoors all day, according to Chinese media reports.

Cities nationwide have been hit by severe air pollution in recent years, much of it caused by emissions from coal-burning power stations.  The pollution, which tends to worsen in winter, is blamed on the use of coal for energy, dramatic economic development, increasing car use and climatic factors.

The National Meteorological Centre said the pollution was expected to continue until Thursday. In China, a pollution index reading above 300 is deemed “hazardous” and everyone is advised to avoid outdoor activities.