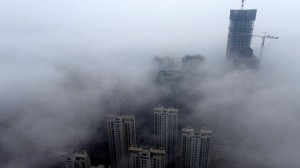 Air pollution in parts of China is now so extreme it could lead to conditions similar to a “nuclear winter,” scientists say. The smog that covers the country has become so thick it is impeding photosynthesis, potentially disrupting China’s food supply.

China’s pollution problem is reaching crisis point, with acrid smog covering six southern provinces for the past week. Over the last few days a total of 19 cities have recorded levels of pollution drastically exceeding the World Health Organization’s (WHO) safety levels.

The toxic smog is having severe consequences, with aircraft being grounded across the country because of poor visibility, roads closing and a significant reduction in tourist numbers. An associate professor at China Agricultural University, He Dongxian, told the South China Morning Post that if these conditions continued, China will experience something akin to a “nuclear winter.”

Beijing authorities have come under fire from environmental organizations this week for failing to activate a red alert – which requires schools to close to minimize the impact of the smog on the public.

China’s smog problem has begun to affect its neighbors overseas. On Wednesday officials in Kumamoto prefecture in southwestern Japan issued a health warning to residents after a dramatic rise in air pollution levels. Authorities advised people to stay indoors and not to exercise outside.

Ministers from China, Japan and South Korea are set to meet in May to discuss ways to mitigate the rising levels of pollution in the region. China has been criticized by its neighbors for its excessive use of coal-burning power stations.