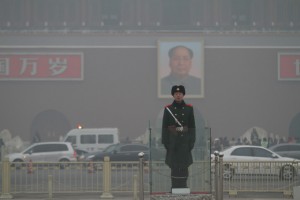 The center will allow researchers to simulate smoggy conditions and study what causes pollution to stay over the city, the Beijing News reported yesterday, citing He Hong, the researcher in charge of the project. The National Development and Reform Commission hasn’t yet approved the project, He said.

The concentration of PM2.5, which are fine particulates that pose the greatest risk to human health, was 205 micrograms per cubic meter over the past 24 hours at 4 p.m. near Tiananmen Square in Beijing, the Beijing Municipal Environmental Monitoring Center said on its website. That’s more than eight times World Health Organization’s recommended 24-hour exposure of no higher than 25.

It also plans to boost the use of natural gas this year and speed up solar, wind and geothermal use to diversify away from coal, according to the statement.