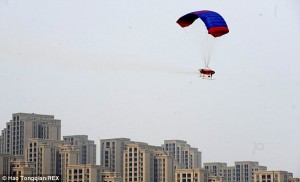 China has a new ally in its raging battle with the fog and smog lingering over Beijing – an unmanned drone spraying chemicals above the city.

The Chinese government, with help from state-owned firm Aviation Industry Corp of China (AVIC), successfully tested the unmanned vehicles over the weekend at an airport in central China’s Hubei province. Called the Parafoil plane, the device is fitted to a gliding parachute and can carry 700kg of smog-clearing chemicals that can be used within a 5km radius – three times the cargo weight of common planes.

It works by spraying a chemical catalyst, which reacts with the particles in the smog and freezes the pollutants. These pollutants then drop to the ground.  The drone is designed to tackle the worsening pollution crisis that has seen scientists liken the smog in Beijing to the ‘effects of a nuclear winter.

The environment has emerged as one of Beijing’s key priorities amid growing public disquiet about urban smog, polluted water supplies and the widespread industrial contamination of farmland. Pollution was so severe in Beijing at the start of March that aircraft were grounded, roads closed and tourists numbers hit.

The direct danger posed to human health was also underlined by the World Health Organisation, whose readings in Beijing had alarming results.  It was reported that the level of PM 2.5 particles – a key measure of pollution because they are small enough to be assimilated into the blood stream – reached 505 micrograms per cubic metre, far higher than the maximum level it considers to be safe, which is 25.

Authorities have introduced anti-pollution policies and often pledged to clean up the environment but the problem has not eased.