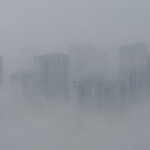 Zhang Dejiang said in a report to the ceremonial legislature’s annual session that businesses were responsible for the environmental damage they caused and must be held to account. He said legal revisions were being prepared, but offered no specifics. Changes are also needed to strictly supervise emissions and control pollution at the source, Zhang said.

Heavy pollution has lingered over much of northern China through February and March, leading to increased hospitalizations for heart and breathing problems, and forcing schools to cancel outdoor events. Heavy smog has also been blamed for disrupting air transport and retarding the growth of crops by blocking out the sun.

China has repeatedly emphasized the need to control pollution, but has been reluctant to enforce even those paltry measures already announced, largely out of a fear of social disruption and increasing the burden on an already slowing economy.