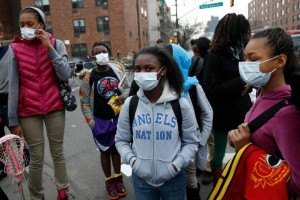 East Harlem residents stocked up on face masks Wednesday as debris and smoke filled the neighborhood with toxic air.

“The air is very bad — like the air at the World Trade Center after 9/11,” said Francisco Garcia, 21, who spent $300 on masks to give away in the area. “I’m just trying to do something nice for people,” the good Samaritan added.

Within 15 minutes, the Preferred Pharmacy at East 115th Street and Fifth Avenue, near the building explosion site at East 116th Street and Park Avenue, sold out its entire stock of face masks, as did other stores in the area.

Mayor de Blasio said a cordoned-off area bordered by East 115th and 120th streets from Park to Madison avenues was being considered an air-quality concern.

The Health Department urged residents to reduce their exposure to smoke by staying indoors and keeping windows closed. The state Department of Environmental Conservation was on scene, and said conditions were comparable to an apartment building fire.