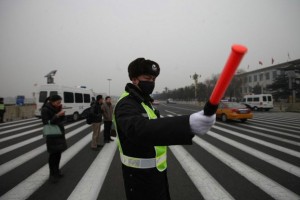 In an unusually public complaint, state media openly blasted city authorities in China’s capital Beijing for failing to limit traffic and take other restrictive steps during “hazardous” periods of smog. The rare criticism of an official authority by state-controlled media came four days after the Shanghai Academy of Social Sciences released a report, evaluating Beijing’s environment as “almost unfavorable for human living.” Online references to that study, initially relayed by the official English-language China Daily, were deleted by Internet censors in China, Radio Free Asia reported.

According to the report, the air quality index (AQI) at city monitoring stations hit the hazardous Level 6 range on that date after three days of stifling conditions. The CCTV messages posted on the Weibo.com website implied that city officials should have declared a “red” alert and taken emergency measures under Beijing’s four-tiered system of color codes for pollution response.

Last October, Beijing implemented the color code system that called for special measures including factory shutdowns and traffic bans based on odd-even license plate numbers during the highest pollution levels. But the Beijing municipal government “has not initiated the emergency response once since the program came into effect,” Xinhua reported.

On Feb. 20, city officials appeared to take heed of the criticism, issuing a “yellow” alert for the first time and later upgrading the warning to the second-highest level of “orange.” Over 100 factories were told to limit or stop production, Xinhua reported. Beijing authorities ordered Communist Party and political institutions to reduce vehicle use, according to China Daily, but stopped short of imposing traffic curbs through license plate numbers.

The city lifted the orange alert on Feb. 27 as a cold front cleared the air, capping one of the worst weeks of pollution in recent memory. Smog returned to the capital on Monday after a brief break over the weekend, Xinhua reported.

In early September, Beijing unveiled a five-year “action plan,” pledging to remove 25 percent of the smallest smog-forming particles from the air by 2017. Ten days later, the central government rolled out its own “airborne pollution prevention and control action plan,” setting out five-year goals for China’s 338 cities. But citizens in the capital have felt little relief so far, with prolonged bouts of dense pollution since the plans were announced.

In a recent interview with the National Bureau of Asian Research, Gardner noted that China’s Ministry of Environmental Protection (MEP) has only about 300 employees, compared with over 17,000 at the U.S. Environmental Protection Agency. The weakness of enforcement at the central government level reflects the strength of economic development interests, he said.

The conflict over enforcement may be camouflaging a more serious problem for improving air quality, since complaints on social media are likely to be coming from the rising middle class, which is both environmentally aware and sensitive to loss of privileges like driving.

Having lifted millions out of poverty and paved the way for a rising middle class, the Communist Party leadership now faces the challenge of the pollution that the progress has caused. China’s leaders are now worrying that dissatisfaction with urban pollution among the middle class has become a threat to the system.

China’s official press highlighted air quality as a top issue for this week’s annual legislative sessions in Beijing after President Xi Jinping toured a city neighborhood in a publicized event on Feb. 25. “Tackling air pollution is the most urgent task for officials. It has become a key criteria for how they are judged, and the absence of progress over time could spell the end of their career,” a Xinhua commentary said.