A “very mild” strain of bird flu has been identified on a Fife farm, the Scottish government has confirmed.
A one kilometre protection zone has been set up around Craigies Poultry Farm on the outskirts of Dunfermline.
Confirmation of the strain of Avian Influenza (H5N1) was issued shortly after 18:00.
Initial tests indicate a “low pathogenic” strain and the risk to human health is said to be “very low”.
All 40,000 birds will now be culled on site on Wednesday. 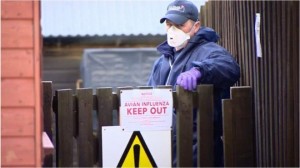 There have been a number of recent cases of avian influenza across continental Europe in recent months including three cases in other parts of the UK in 2015.
Within the control zone a range of different controls are in place which include restrictions of the movement of poultry, carcasses, eggs, used poultry litter and manure and restrictions on bird gatherings.
Scotland’s Chief Veterinary Officer, Sheila Voas, said: “We have taken immediate action to contain this case as part of our robust procedures for dealing swiftly with avian flu.
“Evidence suggests this is a low severity form of the virus however we are taking action to ensure that the disease does not spread or develop into a more severe form.
“I would urge poultry keepers in the surrounding area to be vigilant for any signs of disease and to ensure they are maintaining good biosecurity on their premises.”
The Scottish government’s Rural Affairs Secretary, Richard Lochhead, said: “Livestock owners and the general public should be assured that we are doing everything we can to control and prevent the spread of the disease.
“Any poultry producers who are concerned should immediately seek veterinary advice.”
Dr Jim McMenamin, consultant epidemiologist and respiratory infection lead for Health Protection Scotland, said: “Based on what we know about this strain of avian influenza and the actions that have been taken, the risk to human health in this case is considered very low.
“Health Protection Scotland continues to work closely with Animal Health throughout this investigation.”
Rita Botto, head veterinarian of Food Standard Scotland said: “On the basis of current scientific evidence, Food Standards Scotland’s advice is that bird flu does not pose a food safety risk for UK consumers.”
Penny Johnston, NFU Scotland policy manager, told BBC Scotland: “It’s something that could happen at any time so it was not unexpected.
“There were a couple of cases in England last year so you would expect the odd case to pop up here.
“We have well-rehearsed contingency plans so hopefully we can control it and stop it spreading.
“It’s not a huge disaster so it should not cause widespread panic.
“Unfortunately we have to live with it but we we will try to keep it in a small zone.”
MENU